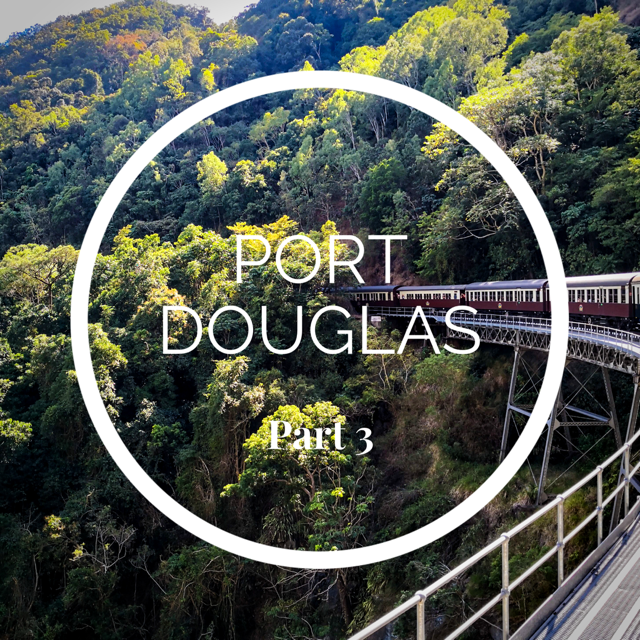 Day six in Port Douglas was Thursday and Dad and I rose early to get in a round of golf at the Mirage Country Club. The normal club rules applied of course with one addition…to forget about your ball if it is in or near the water as the crocodile warning signs are deadly serious. His emphasis on the word deadly was enough to make me buy extra golf balls as I knew I’d be saying goodbye to a few! The course was fantastic and being first to tee off that day gave us the freedom to just cruise around at our own pace and take it all in. The round finished up with me winning, Dad played a shocker and I playing only very bad, but it was nothing that a few late morning beers couldn’t fix back at the clubhouse.

Golf – The more shots you play the more value for money the round.

Meanwhile Amanda had taken the kids into town with Mum and did a spot of shopping. Mum treated herself to a massage and we met Amanda and the kids back at our townhouse for lunch. The afternoon was open so we spent the rest of the day at Four Mile Beach in town. This time we explored the rock pools at the near end of the beach finding crabs and fish galore as well as many shells for the collection.

That night Amanda and I had a date night, which is a rare event for us. We started back at the marina at Hemingway’s Brewery (for some more of that porter) before moving to Zinc for dinner. It was delicious and we had great service. I highly recommend dining there. 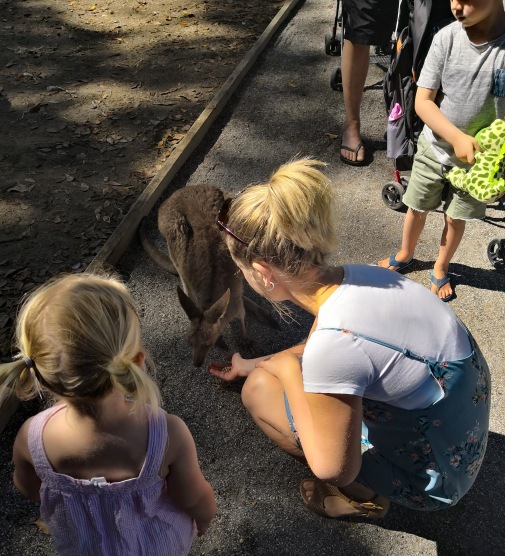 On Friday we were a week into our trip and in the morning we visited the Wildlife Habitat. We walked around the different habitats feeding the wallabies and the pesky ducks, found the crocodiles and cassowary before going back for the koala talk and photo. Amanda got to hold the koala (for a price) although for only a brief moment, but she said it was worth it. We also went to the crocodile talk and the kids got to pat both a baby fresh water croc and an amethyst python. It was at this point Fletch decided he wanted to hold a croc for himself.

After lunch we went back for the 1pm photos and he and Immy both got to hold the baby croc. Fletch surprised me that he didn’t get overwhelmed and was great at following the directions of the keeper and photographer. I love snakes and decided I wanted to hold the python and the kids excitedly joined me as Amanda kept her distance. Luckily it was not as busy as it was for Amanda with the koala and the kids and I both got to hold our respective reptiles for a little longer. 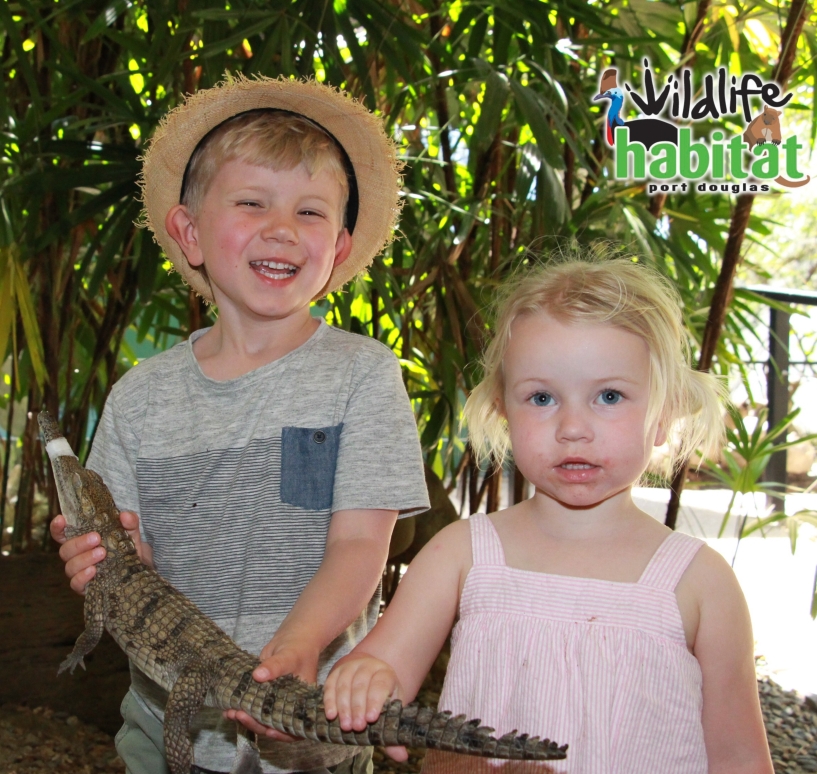 At lunch one of the eclectic parrots came up to Dad, climbed his arm and sat on his shoulder. With his sun baked farmer skin he would not look out of place in a pirate movie conversing with his little green mate. Also walking around was a lady with two lorrikeets and they sat on Amanda and then Dad’s arms. Fletch and I unfortunately missed all this from being stuck in the toilets, the less said here the better. 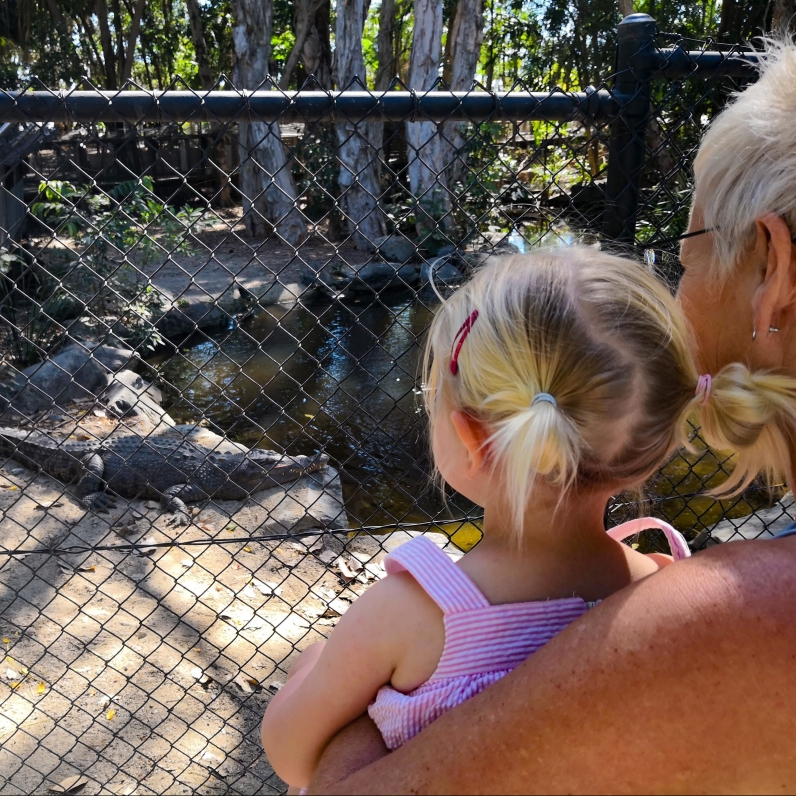 The kids were wrecked and we tried driving around to get them to sleep after dropping Mum and Dad back at the townhouse. They were heading to the beach and we just wanted the kids to sleep. As irony would have it they always fall asleep when you don’t want them to and they will never sleep when you need them to. So during our drive, whilst looking at local real estate, we found a playground and stopped there to let the kids loose.

The playground had a beach entrance so Amanda went back to get bathers and we ended up spending the rest of the afternoon exploring the far end of Four Mile Beach. This looked more like a beach for the locals rather than us tourists, so much quieter and also more treasures to find. As we walked along the water only ankle deep you could find plenty of fossilised coral as well as hundreds of crabs. We also found a hermit crab in an amazing shell, as well as a starfish. The kids happily splashed and chased some fish too.

For dinner we spent our last night at Hemingways, our favourite. Drewboy was playing an acoustic set, a mix of originals with some killer covers, whilst we enjoyed the epic sunset with some drinks and pizzas. After dinner the kids ran around the marina checking out all the boats.

Our eighth and last day we got away a little later than we would have liked, I think we were too reluctant to leave as a whole. We had decided to go to Kuranda up the Skyrail and back down on the Heritage train as Mum and Dad had not done this before and last time Fletch really liked it. The views from the Skyrail are great as you sail over the rain forest. On this occasion it was much drier than before, obviously the drought stretches as far as the tropics! As we’d hoped the kids enjoyed it, but Mum could not wait to be rid of the Skyrail (I don’t think she could see the forest from her sudden plummeting demise into the trees).

Because we left so late we didn’t allow enough time to get around and explore Kuranda properly and from memory we had the same problem last time we visited. The town is great with its markets and bazaar, but we only saw these at a glance on this occasion.

The train back down was great for Fletch as he looked out the window at the amazing views and the occasional glimpse of the diesel engine and carriages as we rounded a bend. Immy on the other hand was a bit bored and so were the rest of us I think. I put it down to being the last day of the holiday and being tired and a bit somber about having to leave.

The airport and flight home were done without drama, which is nice to say. We were all in the same row on the plane so Immy slept between Mum and Amanda and Fletch between Dad and I.

It was a great trip and a place I feel constantly drawn to. One local we spoke to, who had moved from Sydney years ago, mentioned that people only visit Port Douglas three times and on the fourth the move there. We have been there twice now and we were already looking at real estate. All I know is that we have to go back there, especially with my parents!

This was the final post covering our adventure to Port Douglas, so be sure to head back and check out Part One (Markets and Mossman) and Part Two (The Reef and a Roadtrip) to get the full story of our holiday.

The best place to follow Josh’s adventures with his family is on his Instagram site @josh.duthie. You can see this post and more Adventures of Duth by clicking the link below.

Josh Duthie is a keen writer of action and adventure across mediums such as comics and novels. He is passionate about the environment and conservation and hopes his writing can help to create awareness for both, through his story telling. His blog 'Adventures of Duth' is a casual look into his family outings and a snapshot of parenthood with his wife and his two gorgeous and at times troublesome toddlers. View all posts by Josh Duthie

This site uses Akismet to reduce spam. Learn how your comment data is processed.