With our first night in the camper a success we reflected on how fantastic the Lane Cove River Tourist Park in Sydney is located being only a 20 min drive to the city, but still located in a quiet bush land setting. Also conveniently located near the major freeways for getting in and out of Sydney.

That morning the ladies slept in (Immy had a late night, way too excited to settle), so Fletch and I went for a walk around the park where we found some large black bush turkey tail feathers, so started our daily morning ritual of hunting for feathers. These bush turkeys were at all the caravan parks, the bin chickens of NSW muscling out the ibis that we commonly have in Victoria.

Successfully avoiding any peak hour traffic we hit the road at around 10am and were out of Sydney in no time. We only had the one stop at Ourimbah rest stop where I had the best hot chocolate of my life and saw a very large python in a palm tree. There was a little play ground there that the kids went crazy for after being trapped in the car. Before long though we were in Nelson Bay, with little fuss from the kids making for a pleasant drive.

In Nelson Bay we stayed at the Middle Rock Holiday Resort who slotted us near the pool and kids play area, which was great. We were able to get the awning out for the first time and it was a challenge trying to set it up, I got a little frustrated, spat out a few four letter expletives until I finally relented and watched an instruction video. What is it with blokes and not reading the instructions!? Amanda very smartly had decided to leave me to battle with the awning and took the kids for a walk around the park. At the camp kitchen she was startled to see a two metre long goana just cruising through. Fletch sprinted back to get me and I admit this dude was massive! 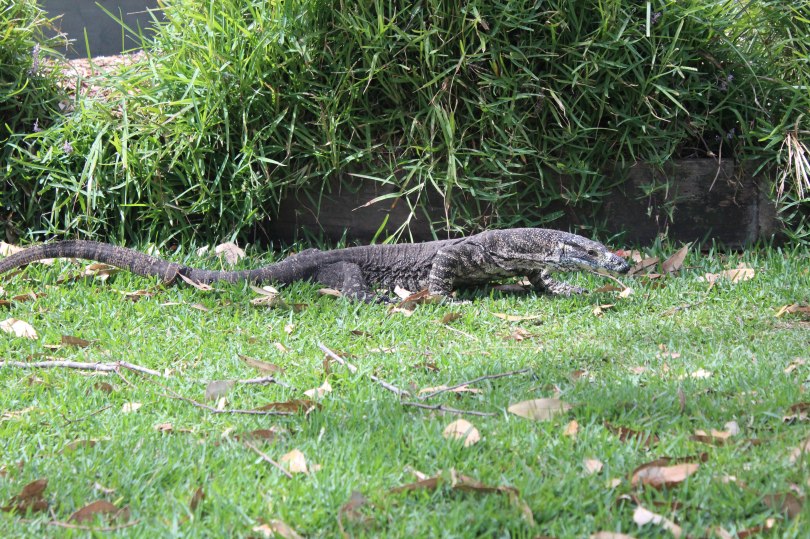 Now with the camper and awning all set up (it was so easy) we went into town to check out Nelson Bay. We found the marina and walked around, watched a yacht being launched from the dry dock to the delight of me (Amanda and the kids couldn’t have cared less). We booked a dolphin watching cruise and the kids played on a little beach and playground there. That night we settled in even more relaxed than the night before ready for a big day of exploring in Nelson Bay.

With only the dolphin cruise booked, we took our time in the morning and with the ladies sleeping in, because Immy still loves a late night wake up or two, Fletch and I decided to find the beach from the caravan park. The beach track was probably only 500 metres long and was through some nice bush land that eventually opened up to some large and expansive sand dunes. The beach itself was gorgeous! Seriously one of the most picturesque places I have visited. Fletch was pumped to finally be at a beach, the kid loves the water! We took it all in quickly and headed back to see if our ladies had risen, which they had.

Fletch on One Mile Beach at dawn

In town we went straight to the Moonshadow TQC cruise boat, which had an all female crew, something you don’t often see and of course they were absolute legends.  Specifically one lady named Evie who was amazing with our kids. It took awhile to find the dolphins and we didn’t get overly close to them, after all we don’t have control over what direction they swim, but the cruise was nice and Evie spoke to us and the kids about the dolphins and the other wildlife in the area too. Part of the cruise was being able to go into the water in a drop down net so you can “swim” with the dolphins. Surprisingly Fletch and Immy were pretty keen to get in and of course we were the first and for a time the only ones on the boat who jumped in!

In the net cruising back to the docks

One thing we didn’t anticipate was that they drive back to the marina with the net still down and you in it. It was fine for the most part as they were going slow and we only had a couple of swells that bashed us. Fletch and Immy clung on tight as we tried to keep ourselves positioned high in the net making sure not to get too low and be swamped by the swell. I did have a moment of questioning “are we good or bad parents for doing this to our kids?” But it was only a fleeting thought as Amanda and I are all about putting ourselves and our kids out of our comfort zones. After all, no great tale starts with, ‘Staying on our couch’. It made for a really fun trip and the kids had an awesome story to tell, especially as the dolphins came in pretty close at one point.

With lunch and ice creams finished at the marina, some guy with a bucket of pellets came over and explained they were about to feed the fish off the jetty. We followed him the the water’s edge and the kids got to feed the swarm of fish and the seagulls who were fighting them for the food. We spent the remainder of the afternoon in and around the caravan park. First taking the ladies to the sand dunes and the beach (One Mile Beach) we found that morning. Unfortunately the beach was windy and choppy so we didn’t spend very long there, instead going back into the sand dunes, which were more sheltered. The kids ran a muck and we climbed one of the higher dunes opening up even better views of the beach and surrounding area. Nelson Bay is renowned for its sand dunes and we were both taken back by how large and expansive they were and these at One Mile Beach were not even the main attraction! 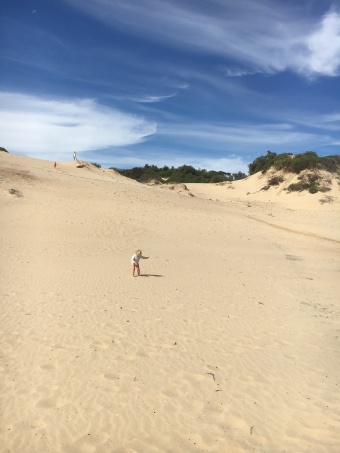 The sand dunes of One Mile Beach with a rare photo of me (on top of the dune).

The rest of that day was spent in the pool and eating at the restaurant/bar making it feel more like a resort than a caravan park. Our first meal dining out was one of the very few times the kids properly sat and ate quietly leaving us to enjoy our dinner! I could have packed up then a happy man, but alas there was much more to see.

Stay tuned for Part 3 of our trip as we next head to Port MacQuarrie.

Also if you have just found our adventures via this post, I encourage you check out Part 1 of this trip as we set off on our first ever trip with the camper trailer.

The best place to follow Josh’s adventures with his family is on his Instagram site @josh.duthie. You can see this post and more Adventures of Duth by clicking the link below or following #adventuresofduth.

Josh Duthie is a keen writer of action and adventure across mediums such as comics and novels. He is passionate about the environment and conservation and hopes his writing can help to create awareness for both, through his story telling. His blog 'Adventures of Duth' is a casual look into his family outings and a snapshot of parenthood with his wife and his two gorgeous and at times troublesome toddlers. View all posts by Josh Duthie

This site uses Akismet to reduce spam. Learn how your comment data is processed.